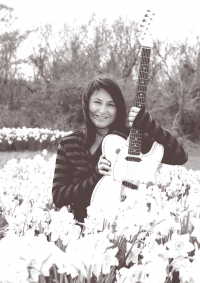 From Block Island, RI.  As an adolescent, my sibs and I would spin in circles while Dad played his guitar and sang folk  and country songs. My brother learned to play guitar first and we started singing to top 40 in the 70's. College radio was the greatest blessing, I literally lived at the radio station at URI continuing to spin as a University DJ, mainly to procure free tickets to shows. Stomping through the rich local music offerings in Providence's 1980's, I fell in love with the emotionally raw Punk Rock scene, spinning too close to 'the pit' which scarred my ankles.

My friends at URI started a band called "That'll Learn Ya!"  sharing stages with our indie heroes of the time: The Pixies, Replacements, and the Ramones and too many more to count.  I stopped spinning and picked up a bass guitar to start a pop punk band called "Plummet."  When our guitar player caught catch scratch fever (for real!) and moved home, I formed a band with my brother and the chef's from his restaurant.  We called ourselves "Randy." It was fun learning guitar so I could write and record. I got to go on a small tour with two other solo artists, Christine Hajjar and Serena Andrews, we played coffee houses, Borders Bookstores, record stores and clubs before I landed back with my college buddies from "That'll Learn Ya!"  now "The Cunninghams."

Find us playing Block Island all summer and mainland RI during the winter.  Never miss a chance to hootenanny, you might happen upon one outside my Food Truck ... or around a fire at the beach. 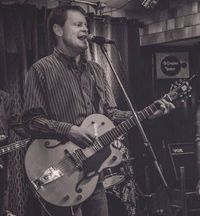 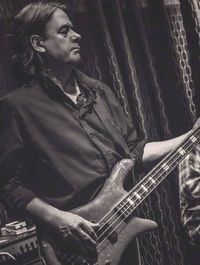